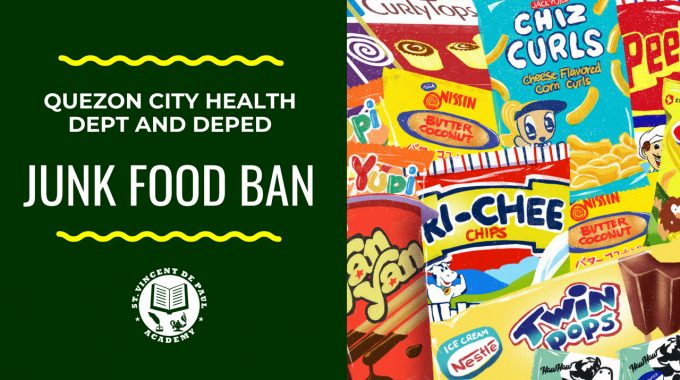 The Quezon City Health Department has begun to perform surprise raids in the area to enforce Quezon City Ordinance 2017-2579 (attached here). The ordinance states that schools and canteens within 100m of a school may not sell or promote the consumption of junk food. Foods covered under the ban are as follows:

SVDPA’s canteen will abide by the policies set forth in the ordinance.

We have also been advised by the DepEd to monitor students who bring their own food to ensure that they are free of junk foods, especially packaged foods and sugary drinks. Failure to do so may result in fines from the QC Health Department related to the promotion of junk foods. These fines are not limited to the school, but can be charged to teachers and parents as well.

We are very aware that the enforcement of this ordinance will be a major inconvenience to many parents and guardians. However, we do hope that everyone can learn from this experience and take a close look at the foods we are putting into our bodies and how they can affect our overall health.

SVDPA is excited to welcome back students for limited face to face and online classes.…

Copyright 2022 - St. Vincent de Paul Academy - Designed by Ray Navarro
This site is protected by reCAPTCHA and the Google Privacy Policy and Terms of Service apply.
Back To Top
Search