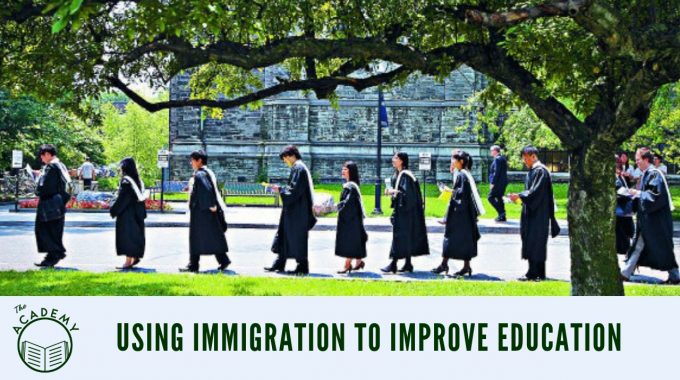 Original article from the Toronto Star

Canada can credit immigrants for making it one of the best-educated countries in the world.

Not only do many newcomers arrive with university degrees, their high expectations for their children’s academic achievements also appear to lead to the pursuit of higher education among their children, according to a new internal government analysis.

The Immigration Department report, obtained through an access to information request, found 36 per cent of the children of immigrants aged 25 to 35 held university degrees, compared to 24 per cent of their peers with Canadian-born parents.

Among the top immigration source countries, more than 50 per cent of the children of immigrants from China and India graduated from university, while one-third of those born to Filipino immigrant parents finished their degrees.

By comparison, between 30 and 37 per cent of children to immigrants from Western Europe completed university, followed by those from Latin America and the Caribbean at a rate ranging from 23 to 28 per cent — about par with children with Canadian-born parents, the report said.

“Parents’ expectations regarding education matters, and immigrant families, particularly Asian families, tend to have higher educational expectations for their children, on average, than families with Canadian-born parents.”

Picot, who declined the Star’s interview request, said family income did not seem to play a role in the gaps in educational attainment.

“This is important because many immigrant families struggle economically,” he wrote in his article, titled The Educational and Labour market Outcomes of the Children of Immigrants: A Success to be Preserved.

The Organization for Economic Co-operation and Development (OECD) ranked Canadasecond only to Korea as the highest educated nation in the world in 2016, with over 60 per cent of Canadians with a post-secondary education.

An Immigration Canada spokesperson said Picot’s study was part of the government’s attempt to monitor the long-term performance of immigration policies and programs by looking at how the children of immigrants are doing in terms of their educational and economic outcomes.

According to a separate study by Jack Jedwab of the Association of Canadian Studies, 54.2 per cent of new immigrants in the prime working age between 35 and 44 had at least a bachelor’s degree in the cohorts arriving between 2011 and 2016, up from 30.5 per cent in the 1990s. By comparison, only 27.9 per cent of non-immigrants have the same level of education. 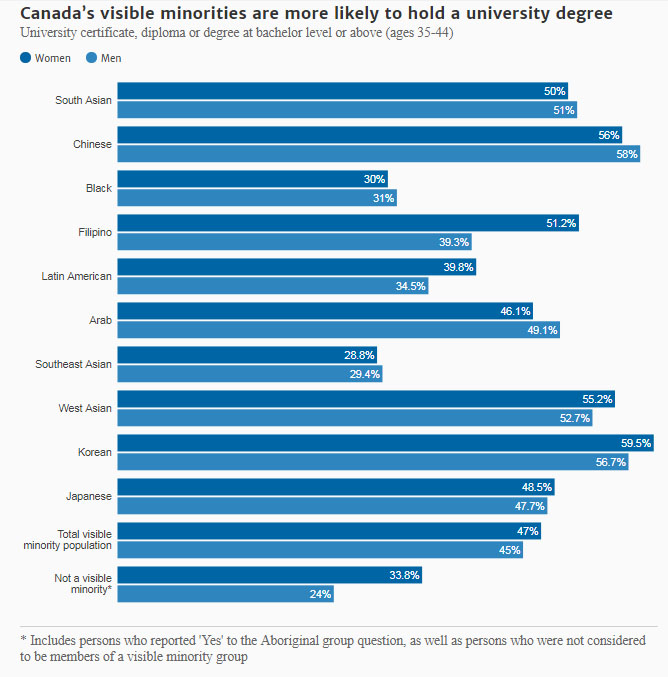 “Canada is the most university-educated country in the planet and apparently immigrants and in particular those arriving here since the beginning of the 21st century are contributing to this,” said Jedwab, who teaches sociology and public affairs at Concordia University.

However, Jedwab warns that visible minorities are made up of many ethnic groups and some fare better than others in their educational attainment. It’s important for policy-makers not to overlook the differences within such a diverse group.

University of Toronto sociology professor Monica Boyd said the aspirations of immigrant parents can be incredibly powerful in steering their children to success, especially if they are themselves highly educated but struggle to return to their old professions and make ends meet after coming to Canada.

“The pressure becomes more on the child because (the parents) did the move for them and want them to succeed,” said Boyd, the Canadian research chair in immigration, inequality and public policy, and co-author of a recent study on educational and labour market attainment among children of East Asian parents in the American Behavioral Scientist journal.

Overall, Picot said the children of immigrants are doing as well or better as adults in the labour market than their peers of Canadian-born parents because of they have higher educational attainment and are more likely to be in professional occupations than in blue collar jobs.

A 2011 Statistics Canada survey found that across all age cohorts, the second generation of immigrants had higher percentages than the next generation obtaining at least bachelors’ degrees.

The Immigration Department study said the average earnings of the employed children of immigrants tended to be 9 to 13 per cent higher than those of workers with Canadian-born parents.

However, it also recognized that these statistics “mask” some important differences for visible minority groups who tend not to do as well in terms of economic outcomes despite their higher schooling.

“Black people have the same high expectations and motivation to achieve. It’s not sufficient to say some parents are more motivated than others. Doing so, we focus less on the socio-economic conditions, racism and xenophobia different ethnic groups and generations find themselves in,” said James, the Jean Augustine Chair in Education, Community and Diaspora at York.

“The way the (Immigration) Department’s report is presented, a teacher might approach and interact with students from different backgrounds differently based on expectations. A student may live up or down with the teacher’s expectation.”

Fewer children are reading for fun, US data shows

American children are reading less overall than they were in the past, and the share…

Why double mask? On top of the CDC's new findings and subsequent guidance regarding double…

Copyright 2022 - St. Vincent de Paul Academy - Designed by Ray Navarro
This site is protected by reCAPTCHA and the Google Privacy Policy and Terms of Service apply.
Back To Top
Search